Various international industrial and research projects have developed interfaces between aiT and other analysis tools. For example, in the ALL-TIMES project, aiT was integrated with several other timing-analysis tools into a single development framework. 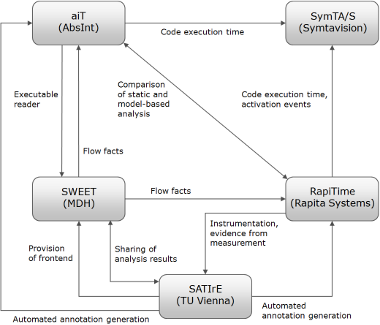 Another tool chain was created in the INTERESTED project and evaluated by major European embedded tool users, who all reported significant productivity improvements:

“Airbus Operations S.A.S has estimated that its use of the INTERESTED tool chain resulted in a 48% reduction in overall project effort […].
Thales reported that the rigour imposed by the use of model-driven tools compared to freeform alternatives resulted in a 25% reduction in overall project effort […].
Siemens Mobility reduced overall projects costs by 20% […].
Focusing on overall development effort, the Commissariat à l’Energie Atomique et aux Energies Alternatives estimated that […] initial development costs were reduced by approximately 40% and 69% for on-going maintenance costs.
Magneti Marelli stated that […] a 50% time saving, and possibly more, could be made by applying the INTERESTED tool chain.”